Posted on September 19, 2016 by colonelorbit

What a great trip, weeks of planning every detail of the mini-expedition, then within a few days of starting the weather forecast changed to be massive surf and strong winds on the first two days. As this was also the difficult section of Cornish coast I decided to scale it down to a four-day expedition, starting from Widemouth and ending in Watchet.

Drove down from West Somerset to Widemouth Bay, parked, changed, handed the keys and after informing Falmouth Coastguard and the beach lifeguards of my plans I said a tearful goodbye to my wife Sarah and set off into the surf. Getting out past the break was easy enough and the sea was calm and glassy once I got out of the surf zone. The coastline was stunning, with rock strata and outcrops jutting out from the beach and sea, but with the growing swell I had to keep my distance. I managed to land at the rocky Welcombe Beach for lunch and a short rest, but by the time I got to Hartland Quay for my second planned rest stop the swell had built up so high stopping wasn’t a safe option. The tide had pulled me to Hartland point ahead of my schedule and I arrived 1.5 hours ahead of slack, but the race round the headland wasn’t too bad, although it extended, with a following sea for about 5km the other side. But finally the Blackchurch Rock, of Mouthmill Beach, came in to view and the sea calmed enough for a safe landing. Was pretty happy with how the that first day had gone, the planning, my paddling and the boat. Dragged the boat up the beach and set up the first bivvy and had a natural wash. Shared the night with the odd slug, but slept pretty soundly! 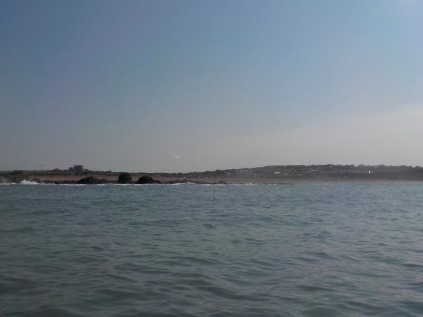 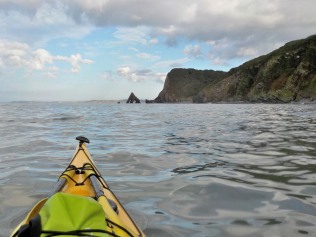 A husband, a father, an Environmental Scientist and a Kayaker - not necessarily in that order!
View all posts by colonelorbit →
This entry was posted in Uncategorized. Bookmark the permalink.